Some of the reef balls have items lodged into them, it really makes them a little more interesting to look at and gives some small homes for some small critters.

A couple of weekends ago I was out diving with my friends from BREEF. We were at the sculpture garden and were tasked with adding a number and direction marker to each reef ball. You can see the marker in the picture above, it’s small, yellow and on the left hand side of the photo. 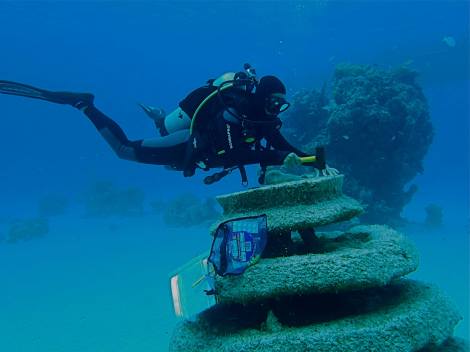 Hammering the nails in

The reef balls are made with concrete and before we could put the nail in them that will hold the marker in place we had to drill a hole. This meant that I got to use some underwater power tools. Cue 2 hours of me and Eddy drilling holes and hammering nails, all the while trying hard not to break or damage the reef balls. We did our best but there was some small knocks that couldn’t be avoided.

Me drilling into a reef ball

It wasn’t too difficult to do, except for the fact that we were diving in shallow water in thick wetsuits. As I am sure you are aware that doesn’t make for a good combination. Buoyancy issues were the problem du jour and it took a lot of effort to keep ourselves underwater. We completed almost all of the 50 or so reef balls. 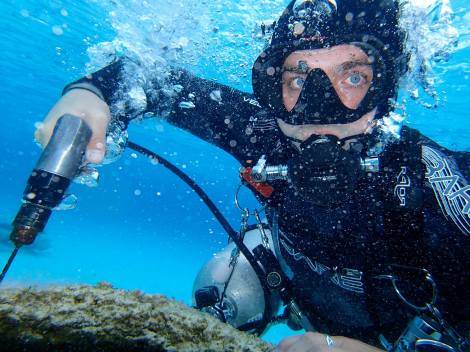 I love the expressions I make when I am diving lol