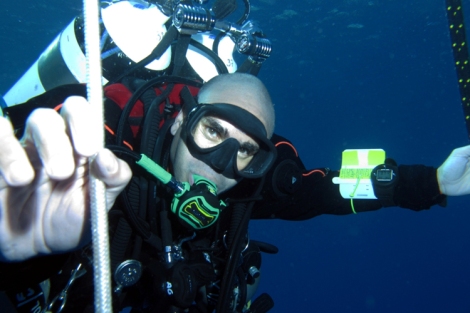 Some of you might have heard of the upcoming deep dive attempt in Egypt. Ahmed Gabr is planning on diving to dive to a depth of 350m and his attempt will take place on the 18th September.

Recreational limits are set at 40m due to issues that can arise from gas narcosis. Technical dive courses can take you beyond these limits by using different gas mixes.

There are several issues that can affect a diver when using different gas mixes. Primarily there is gas narcosis, this is when the narcotic effects of the gas cause physical and mental issues to the diver. There is also oxygen toxicity, this is caused by using oxygen at high partial pressures for a long time or by going deeper than the mix allows. Thirdly there is High Pressure Nervous Syndrome.

Once a diver descends below 100m (though many different sources list different depths1 2 3) two factors come into play that may make the diver more susceptible to succumbing to HPNS. This is because they reduce the nitrogen content of the gas they are breathing by substituting in helium. The first factor is the rate of compression and the second is the absolute pressure that is exerted on the diver. The effects of HPNS can be mitigated by adding an amount of nitrogen to the breathing mixture, small so that it will not cause any gas narcosis but large enough so that it will mitigate the effects of HPNS. What actually causes HPNS no-one really knows, however it is something that is serious and shouldn’t be taken lightly.

Sheck Exley wrote about his experiences with HPNS in the Mar/Apr 1994 of Underwater Speleology. He had performed a dive to 266m in South Africa where he suffered quite severe HPNS.

Suddenly my field of vision became hundreds of small adjacent concentric circles, each of which had a tiny sparkling dot in the center.  My distance vision seemed to start blurring, and my skin began itching all over, then stinging. My entire body began trembling …. gradually escalating to uncontrollable shaking by the time I landed fins first on the bottom.The HPNS was sufficiently alarming that I did not consider wandering down the slope to try for 900 feet

Exley had descend at a very fast rate, 30m per min, but once he noticed that he was suffering from HPNS he paused for a minute and then reduced his descent rate to about 7 or 8m per min. He found that when he returned to 400ft for his first deco stop that the symptoms of HPNS has abated. Exley then planned a dive in Mexico with his dive buddy Jim Bowden to dive the cenote called Zacaton. It was the deepest of 5 cenotes that Bowden had found the previous year. Unfortunately it was to be Exley’s last dive, and by the time the article that Exley had written about his experiences with HPNS he would be dead. No one knows what caused Exley’s death but Bret Gilliam writes:

The best educated guess would point to an HPNS incident. Exley had experienced a bad one in Africa that resulted in uncontrollable muscular spasms and multiple vision. This may have manifested again with more violent tremors that could have triggered an oxygen convulsion or simply made it impossible to negotiate gas switches as necessary. His death will remain a mystery and a tragic loss to the cave community.

So why would anyone want to go this deep when the risks are so high? One of the most experienced cave divers in the world may have lost his life due to HPNS.  Could it be because they are trying to advance dive theory? Well actually there isn’t much that can be gained from doing this dive wet, when it could be done dry in a chamber. In fact most deep dives of this nature are done by commercial divers who are lowered to depth at a very slow rate, too slow to be done on Open Circuit Scuba. There are more issues at play than just HPNS when diving deep, but that’s a discussion for another day.

For whatever reason that Ahmed Gabr has chosen to do this dive I wish him the best of luck. If he is successful there will be a lot of questions about the dive and positive press for the dive community at large. If he isn’t successful, well it’s not going to be great for anyone. You can find out more about his attempt here. I am sure I will write a post after his attempt as I am interested to know the outcome.