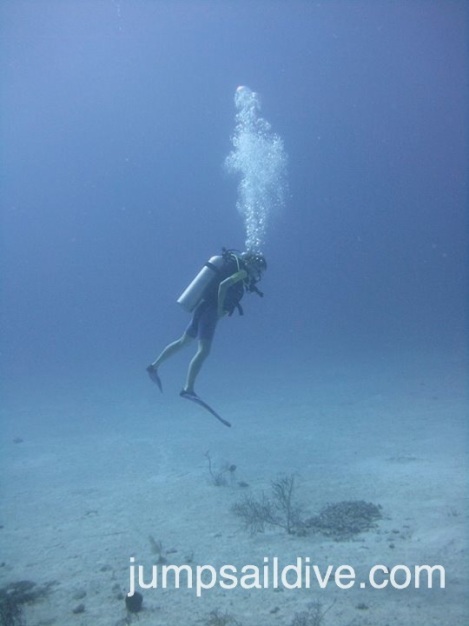 It was only last week that Sharleen and I had gone on a 3-tank dive trip and completed her Adventure Diver Course.  Now  it was time to do her Advanced Open Water course.

We had to do the Navigation Adventure Dive and we planned to do Peak Performance Buoyancy. We met up at 8am at Stuart Cove’s so that we could discuss and finalise everything before we got on the boat. I briefed her on what we would be doing on both the dives and she had a practice on land on how to use the compass.

The first dive was going to be on The Sea Viking. It is an old fishing boat that I have dived before. It is also beside a nice reef called Mike’s Reef. It has a nice sandy area at the bottom so it makes it ideal for doing skills practice. We descended nice and slowly and I demonstrated how to gently add air to the BCD so that I could stop myself inches above the sand. We then knelt down and emptied all the air from the BCDs. It was time to get neutrally buoyant and hover. After a few shaky starts eventually Sharleen managed to hover for a good 90 seconds (that’s 30 seconds more than the requirement) without any sculling or kicking. We then practised using breath control to move over objects. Time for some more hovering practise. This time in a vertical position. I demonstrated how to hover upside down and Sharleen had a go but she didn’t like that one. We swam over to the reef and used breath control to move over corals and rocks. I gave her some extra weight to hold and she adjusted her buoyancy perfectly. We did some more hovering practise and exploration of the wreck then it was time to ascend and do our safety stop.

The second dive was on the Twin Sisters. This was to be our navigation dive (unfortunately there isn’t a lot of reef there but if you look hard enough you can find it). We splashed in and went to the end of the first wreck. It is approximately 110ft long (I’ve been told) so that meant we could use it to calculate how far her fin kicks propel her.  We did this in both directions. She then used a compass to follow a heading from the bow of one ship to the stern of the other. After that it was time for a square. Which she performed really well despite the ever increasing current. A little bit of natural navigation along the reef and it was time for a bimble around the wrecks. We hunted for nudibranch and octopii. We didn’t find them but we did find some cool hermit crabs. Our NDL was getting low and so was our air so it was time to head to the surface.

Big congratulations to Sharleen for completing her AOW and for being my first AOW student. I know that I learned lots on this course. I really enjoyed taking her out and diving with her. Unfortunately that will probably be our last dive together in 2013. But we have plans for next year…a rescue course, a few specialities and maybe even a Master Scuba Diver.