Penetrating the Um El-Faroud with the right stage disconnected.

So today’s plan was to do two dives: both at the Blue Grotto.  The first dive was a deep-wreck dive. This would allow me to practise removing and moving with the stages. The second dive was to be a SMB (Surface Marker Buoy Drill) – something I have never done before and was eager to try.

We were diving the Um El-Faroud with 3 other guys using twin sets. I set up my kit and we got under way. The visibility was not very good, however just as we were leaving the reef to start making the crossing to the wreck we saw a HUGE squid easily 1.5m long swimming 5 metres below. We watched it for a moment and then we crossed the sea to the wreck. Steve had briefed me that once we got to the wreck I was to lead the direction of the dive. If there was somewhere that I shouldn’t go into he would stop me, otherwise anywhere was fair game. I spotted a door, looked at Steve for approval and with a quick nod I understood what to do, I removed my right stage (cylinder) and entered the room. It was small and I bimbled around in it looking for an exit. I found it and went through it on to a walkway. Unfortunately, Steve had made me wear gloves. His rationale behind wearing them is that on a tech-dive you would be wearing gloves so I should get used to it. The lack of dexterity and tactile feedback that they gave meant that I couldn’t find/feel where the d-ring was to reconnect my stage to the rig. However, it was time to turn again and with my stage now fully removed I went through a corridor to the other side of the ship. Once, there I exited the wreck and adjusted the stage and reconnected it. Steve gestured to follow, and we went through a window into another room. This room led to a stairwell and at the bottom of the stair was the engine room. It was really dark inside so I kept my eyes peeled and watched for Steve. We swam around the engine and then made our way out and onto the deck.

On deck we saw towards the bow of the boat. We passed through some more small gaps and then noticing that we were reaching our no-stop limit we started to ascend as I was not to do a decompression stop. We swam back towards the reef. At the reef we made a short stop at 13m so as to gas-off. Once all the twin-cylinder divers had finished we all made our way back, performed a 5m/3min safety stop, and exited.

The dive took 57 minutes and had a maximum depth of 33.7m (that was inside the engine room). The left and right stages had 30 and 40 bar respectively. Also, I had never been so close to my no-stop limits as I had been on this dive. I really enjoyed this dive, it was a great experience all round.

On the surface we decanted some more gas into my tanks. I had never done this before and I am happy to have learned this skill. 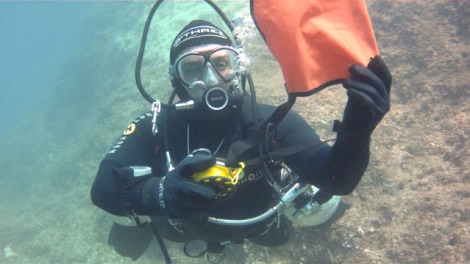 Me about to inflate the SMB.
Notice my hose is too far away from my neck. Bad, bad diver.

Steve had swum out to the wreck to show its location to a group of divers.  From the surface I watched his bubbles as he returned. Once he got into the bay, I joined him in the water. This is where I realised that I had made a few mistakes. Firstly, tech-divers don’t allow anyone to distract them when they are setting up their kit. A diver, who wasn’t diving, kept talking to me. I should have stopped him and focused on what I was doing. Because of this mistake, I made the following others: not connecting my BCD inflater hose, not tightening up my hoses, and not clipping on my long hose.  I am sure the other two came about because of the fact that I was rattled. I had also moved my dive computer to my right wrist, so there was a moment when I thought I had lost it.

The second dive was to practise SMB drills. I managed to get it set up, more or less perfectly but then messed it up at the end by not getting the it to inflate. My buoyancy control through-out the procedure was pretty good and I was more pleased with that.  Steve signalled that he was out of air soI gave him my long hose.   We then ascended to 4m and I needed to dump air from my BCD, but I couldn’t find the dump-valve cord meaning that I went up too high (a problem due to the gloves restricting what I can feel). In my panic I forgot that I could kick down – lesson learned – I then found the cord, released the air and settled beside Steve at 4m.

I am really enjoying this course. Out of all the courses that I have done with PADI this has been the most challenging and most diverse.

What’s left to do now?

I have one more side mount dive on the course to do. This is where I will start learning how to use multiple stages, more SMB drills, complete out of air drills and probably more buoyancy drills.

I still have to complete the Deep (one more dive) and Wreck (two more dives) specialities.