After a few false starts, two previous dates for the trip has been cancelled, we had the go ahead for the trip on the 31st May. The plan, as with most dive club trips, was to sail to the Berry Islands – specifically Whale Cay – and do 3 dives in the surrounding area.

I packed my dive kit the night before and set my alarm for 5.45am. This would give me enough time to check my kit, have a good breakfast and arrive early at the dive shop so that I wouldn’t have to rush. Unfortunately, I made a mistake in the setting of my alarm. I did set it for 5.45am, however that was for weekdays! Luckily I awoke at 6.10am and was able to grab my things and be out the door by 6.35am, all so I could be at the dive shop for 7am.

We left the dock slightly later than anticipated, and soon we were on our way to Whale Cay. The journey was fairly uneventful with the odd flying fish spotted off the side of the boat. Whale Cay is located in a marine protected area so we were hopeful that there would lots of things to see. 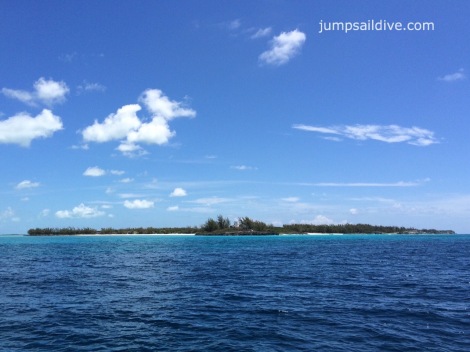 The first site was opposite the small light house on Whale Cay. I buddied up with Jay (a former AOW student of mine) and we jumped in. The visibility wasn’t the best and at first it seemed like there wasn’t much to see. We tracked back across the reef and found some fantastic swim-throughs and tunnels. It was fantastic. The wild life was fantastic. The schools of fish were abundant. I was lucky enough to see a longsnout butterfly fish, which are fairly difficult to find here in the Bahamas.

The second dive site was called the Throne of Wo(e). Again we were blown away by the number of fish that we encountered. Soon after splashing in a HUGE lobster climbed out of its hole to check us out. Its legs were as long as my forearm and it’s body was easily three quarters of a metre long! We stumbled across a sleeping nurse shark and another huge lobster. I love marine protected areas. However, navigation was difficult and it did require a quick pop to the surface to check that we were going in the right direction back to the boat. But we didn’t find any thrones.

After the second dive we stopped for lunch between Whale Cay and Little Whale Cay. We views were fantastic. From the boat we could see sharks and stingrays. The water was so clear and it was possible to walk from our anchoring to the shore. Unlike our previous trip to the Exumas there were no iguanas to interact with, but it was beautiful nevertheless. \

After a surface interval of almost 2 hours we moved our boat around to the third dive site. Coming around the channel it was quite clear that the dive site was going to be experiencing lots of surge and current. To top it all we anchored quite far from the reef. Concerned, Jay and I splashed in. We surfaced swam half way to the reef before Jay decided to turn back, as this was my 350th dive I continued on with the planned dive but I decided that I would dive for only 20 minutes. I watched as Jay swam back to the boat and got out. I descended down and proceeded along the reef (what I could see of the reef as the visibility was quite poor). I noticed that the current at the surface was going the opposite direction to the surge under water. I proceeded along the reef away from the channel between Whale Cay and Little Whale Cay. After about 15 minutes I decided to start to make my ascent when I bumped into the rest of the divers from the boat. The dive leader told me not to go in the direction I was going but to follow them, in the direction of the channel. Seeing as it was a big group filled with inexperienced divers, and safety in numbers, I followed.

What a mistake. I should have stuck with my original plan. Within 5 minutes the group had become separated, the dive leader was charging through the surge and many of us struggled to keep up. A group of us, those that we could all see, decided to turn back and head to the boat. I had been keeping a track of where we were and a quick calculation later I had my compass bearing and swam towards the boat. After battling through the surge for 15 minutes, I ascended and found that I was off of the port side of the boat. I climbed out furious that I had followed the group. My original plan had been to surface after 20 minutes and surface swim back to the boat using the surface current to ease my swim.

The boat then had to collect the divers that were near to its original anchoring, once that was completed we then moved to a SMB and picked up the remaining divers. Luckily no one was hurt and everyone made it safely back on the boat. I just can’t help but think that we should not have done our third dive in that location.

With everyone back on board it was time to head home. It took a little over two hours to get back to the dive shop.

The three dive sites. The first is in the middle, the second on the left, and the third on the right.