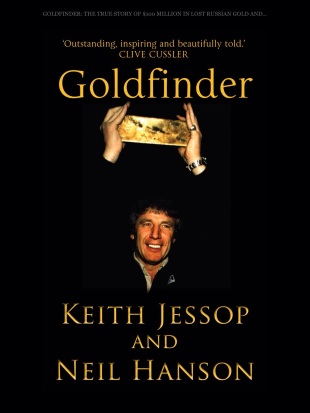 A small article in Diver magazine alerted me to this gem of a book. At only 99p on the Kindle it is definitely worth a punt. Goldfinder is the story go Keith Jessop and his quest to retrieve millions of Pounds of gold from a sunken British WW2 ship – HMS Edinburgh.

Jessop started diving from a young age and looked for away to earn a living without working behind desk. He soon turned his hobby into his livelihood and was salvaging wrecks for non-ferrous metals. He became a respected at what he did, being able to recover metals from the most difficult wrecks. I found the story is very intriguing. He details how he accomplished his goals and recovered from his setbacks. There is an element of suspense when you find out two of his “colleagues” (Ringrose and Bona) try to take his business out from under him – though I can only assume they were not successful as the conclusion to that part of the story is not included in the book. This omission left me feeling a bit cheated and wanting know what happened.

I really enjoyed the book. It included lots of elements of how diving and wreck salvaging took place back in an era where regulations were non-existent or not stringently enforced. It also included discussions on saturation diving. Saturation diving is the process of staying at depth for long periods of time and then only using one compartment (the slowest) as the controlling compartment for the decompression. Saturation diving is used in a commercial setting fit repairs to undersea pipelines and on oil rigs.