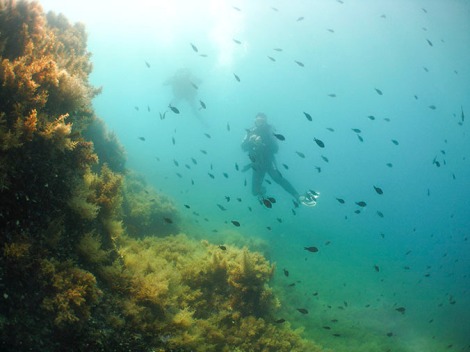 Brad, one of my friends who travelled with me to Malta in October 2012, decided that he wanted to complete his PADI AOW and organised with Jo, a mutual friend of ours, and since I had just bought a new BCD and new regs it looked like a good opportunity to go and try it all out.

Our day started at 5am on Saturday. We had arranged to go, by car, with a girl called Jill. She had organised the car using Rome’s car sharing service and was planning on picking us up at 5.30am. Unfortunately, none of the cars she tried to collect would work. This put Amanda and I in a quandary: do we run to the train and hope we catch the only train that would get us there in time to dive or do we cancel?

We dashed to Trastevere Station and made it to the platform with seconds to spare. Jill didn’t make it in time. We updated our friends in Porto Ercole of the situation, they picked us up from the train station and took us to the dive shop.

The dive shop was Argentario Divers, our friend Jo had organised everything so that took some of the stress out of it. I only needed to rent a wetsuit and weights, so I was organised and ready to go pretty quickly. It took them a bit longer to get all the kit for Amanda but we were soon on our way.

Two boats went out: the Abracadabra (a large boat with indoor seating) and the Mako (a 10m rib). We were on the rib. So as I didn’t want my clothes to get wet I sent them back to the dive shop. We quickly loaded up our gear and were off.

Even though Abracadabra left first, our rib was much faster and within 5 minutes we had over taken them and were making way. Our destination was Isola di Giunnutri to do a dive at Secca Punta Secca. This dive was to be Brad’s PPB (Peak Performance Buoyancy) dive, while for me it was to be a check dive as I made sure all my new kit worked.

A group of Italian divers entered first, Jo, Brad and Noah (a friend of Jo and Amanda’s who was also doing his AOW) entered second, while Amanda and I entered last. The dive was around a circular reef. Having heard wonderful things about the wild life in this area we were quite disappointed to find that most of it was just sea cucumbers and starfish. We swam around for a bit and then went and observed Brad and Noah on their PPB. Even though we both had over 100 bar in our tanks we decided to end our dive when the students ended theirs – there just wasn’t anything to see. Then Brad pointed, I turned around and there swimming past me is a barracuda.  A great end to an otherwise uneventful dive.

A lone barracuda swims by.

We exited the water, leaving our BCDs tied to the side of the boat. The Italian boat crew soon had them on board and had swapped our cylinders for us – I couldn’t believe it.

The plan changed, our second dive site had too much current so we headed on the rib to Porto San Francesco. With a surface interval of just over an hour we kitted up and entered in the same order as we had on the previous dive. This dive was to be Brad and Noah’s deep dive. The objective was to descend to 22m, see how the colours changed at depth and what happens to an empty bottle of water.

The descent went well, though the visability varied from 3m near the surface to 10m at the bottom. The boys observed what happened to the colours and the bottle, though the loss of colour surprised them the most.

Noah comes in for a closer look at the colours card.

On the way back to the boat, there were a few problems and luckily I was close enough to both Brad and Noah to sort them out. Brad suffered from a reverse squeeze and unfortunately ascended to try and fix it. With a little coaxing I brought him back down and he was able to continue diving as the pain subsided. Noah lost control of his buoyancy and started to rise quickly, I grabbed him and pulled his dump valve to release air from his BCD. Once he was settled, I showed him some tips on how to improve his trim and we were on our way again.

Amanda and I left the group, as they had finished and were wanting to return to the surface, and explored the rocks around the shore. We were glad that we did because we some nice anemones and a HUGE stonefish. I tried to take a picture of it but it swam off just as I pressed the shutter. After that we decided to end the dive and join the others on the boat. We had a quick snack (we had been told lunch was being provided) that would just stop us from devouring each other.

Within 30 minutes we were back on the shore talking about the dives we had just done. Porto Ercole was having a pirate themed weekend so we decided that we’d go out later and watch the festivities.  Brad and Noah still had 3 more dives to do and they would be completed on Sunday. Amanda and I decided to skip Sunday’s dives and return to Rome.