Getting ready for the safety stop at the Blue Hole

So after a great first day of diving we were ready for some more. This time we were going to Gozo. The plan was to do The Blue Hole and The Inland Sea. I had done The Inland Sea before when I was doing my Deep Diver Speciality. However, we were meant to to The Blue Hole as well, but due to rough seas and inexperienced divers we didn’t do it. So I was really excited about going there.

We went to take the ferry from at Cirkewwa across to Gozo. The van we were in had a high roof so that meant we couldn’t take the ferry that was there and we had to wait another 45 minutes for the next. So we went for a wander around the harbour and a look at entries for the dive sites at Cirkewwa (P29 and the Rozi). Once we were on the ferry, and then on Gozo it didn’t take too long to get to The Blue Hole.

It is quite a popular tourist spot as the Blue Hole and the Azure Window are beautiful natural attractions. I had only seen the Azure Window and as soon as the van had stopped, I made my way down the rocks so that I could see it with my own eyes. 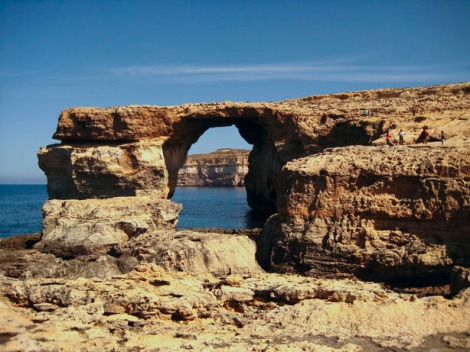 We kitted up and made our way down the rocks to the entrance. Sarah (our dive leader) wasn’t exaggerating that the walk down would be tough. By the time we got there we were hot and sweaty and ready to get in. Standing above the entrance to the Blue Hole it is obvious to see why it is considered amazing. We quickly got in and the cool water was luxury.  We descended down and swam under the Azure Window, we followed the reef around until we reached the Chimney. Amanda was worried about this as it was a confined area so she followed Sarah and I followed her. The Chimney is a fantastic hole in the rock. Just wide enough for one person to swim up but there are a few passing places in case you meet any other divers. I thoroughly enjoyed this dive. It was one of my favourites of the holiday. 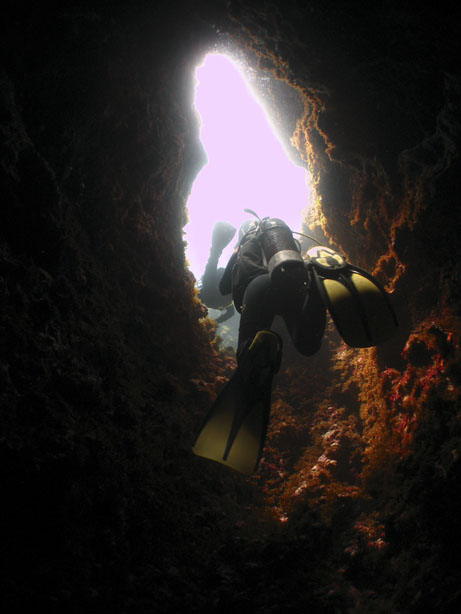 Passing through the chimney at The Blue Hole

The second dive was at the Inland Sea. This is only a 2 minute walk away from the Blue Hole and Azure Window so we put our kit on the van and walked down the hill. There isn’t much to see and do while you are waiting on the surface so we had lunch at a little cafe that looks on to the Inland Sea. The prices were really cheap and the food was pretty good.

I had done two dives previously at the Inland Sea (Deep 2 and 3) so I wasn’t really that excited about this dive. So after an hour had passed we suited up and got in the water. I felt cold. I think it was probably due to having sat in the sun. I put it out of my mind and descended. I had been having problems descending due to being too buoyant so when I emptied my BCD I was surprised to find that I dropped pretty quick, I guess I had just got used to the weight I was carrying. We swam out through the tunnel. Sarah had lent Amanda a torch and she was busy looking in cracks and holes for signs of life. We passed through the tunnel and out in to the sea. Turning left we followed the reef along and once we got to 120 bar we started to turn back.

I tried to take pictures but I has having problems with the exposure settings. They were coming out blurry and the white balance was off. Coming through the tunnel I swam ahead and turned around. I was able to snap some good photos of everyone swimming through the tunnel. So that made me happy. Amanda really enjoyed this dive, probably because we weren’t out in open sea for much of it and it had been different from most of the other dives that she had done.

That was our last two dives on Malta and we were going home the next day.