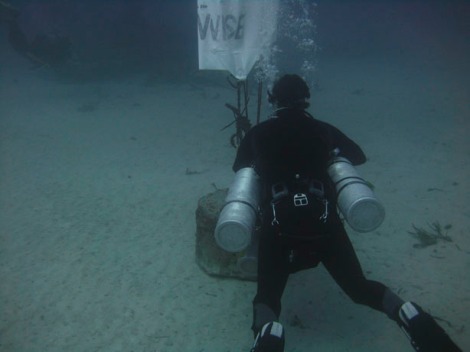 The prospect of diving with the Swedes was appealing and I signed up for this dive straight away regardless of the fact that I was going to helping to move a stone block away from the wreck.

We took the boat from the dive shop. This meant that we had to kit up, swim to the boat and then get on it. Not too difficult. Though due to the fact that I was trying to conserve air I didn’t have a reg in so was struggling a bit for breath by the time I had clipped my stages to the side of the rib.

Soon we were off, bouncing across the waves. The site is about 1km away from the shore so it didn’t take too long to get there. Steve dropped in first and made his way down to set up the lift bag. We jumped in, in groups of twos, and started to descend. While on the move I repositioned my third stage, turned it on, and started using it. I was copying what I had done on the Imperial Eagle. Also it would mean that I could use my sidemount to help inflate the bag if needed.

Unfortunately when I couldn’t hold my buoyancy when I was below 30m. I think that I have become accustomed to the weight that I was carrying and that it was time to take some off. This was truer that I had realised at this point. I didn’t particularly enjoy the dive because, even with the wing fully inflated, I could get no lift. I took a few pictures and watched as Steve moved the stone. He didn’t need anyone’s help. 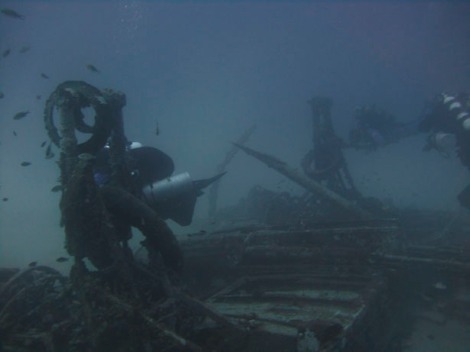 My NDL was down to 2 minutes so I signalled to Steve that I was heading up, said goodbye to the Swedes and started making for the surface. This was when my problems really began to start. I couldn’t ascend past 3om. I kept swimming up but I was being pulled down by the weight of the Nitrox in my sidemount. As I had only used the stage up until this point in the dive, and I had 80 bar left on that, my two A80s were keeping me down. After a few minutes I exhausted the Nitrox 28 in the stage. I switched to the sidemount. I tried swimming up but I was still overweight. My wing was fully inflated and I could get no lift. As I was above everyone else, I couldn’t signal to them that I was in trouble, and I didn’t want to go into deco; there was only one thing to do. I had to drop the stage. I unclipped it and I let it go beside the shot-line, that way it could be recovered easily. I immediately had buoyancy.I felt bad at dropping it. But I knew that I couldn’t carry it up myself, not with my sidemount being full. 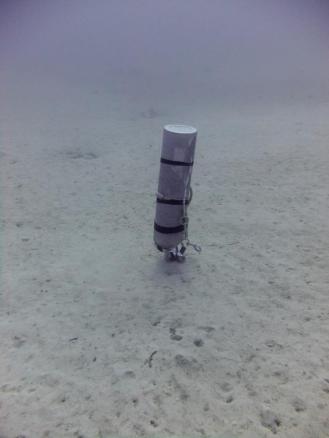 Steve grabbed a quick picture of the stage that I dropped, before he picked it up. Thanks Steve!

I found that I was now able to swim up, however I still was a little heavy. By this time the Swedes had started their ascent. I watched as Steve picked up my empty stage. We made deco stops for a 1 minute at 21m and then at 3m intervals until we got to 6m and we made our normal 3 minute stop. While we were ascending, one of the other divers was swimming around like crazy. We were all trying to stay really still and it was as if he was on speed. To be honest, he was getting really annoying as he was making so many bubbles. At one point he even crashed into one of the Swedes. It would have been funny, but I wasn’t feeling very happy as I felt like I had just been on of the idiot divers that I try not to be.

I couldn’t wait to get back on the boat. I sat their in silence for the journey back to the dive shop. The was the opportunity to go and see the Blenheim Bomber but I decided that it was best not too push it.

It is interesting that yesterday when I did the Imperial Eagle, I had the same set up and that I had no issues. Perhaps because I had used more of the air from the sidemount and I had finished the stage before beginning my assent meant that I had greater buoyancy. I have removed 2kg from the sidemount harness. Hopefully that will mean that I am able to still descend tomorrow.

Today’s experience, although there was a successful outcome, has taught me to not be complacent. I am pleased that I had done the Rescue Diver course, as I could feel myself becoming panicked on that ascent. If I hadn’t been trained to notice those emotions in others I might not have recognised them in myself. Luckily I did, I calmed myself down and dropped what weight I could. I then ascended slowly.