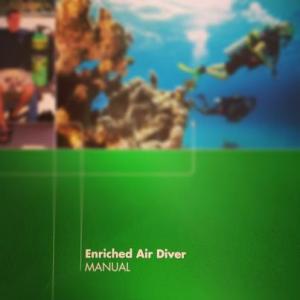 I have just done the PADI Enriched Air Diver course and it has answered a lot of the questions that I had about partial pressures.

So if you are confused about partial pressure as I was let me clear up what it means.

If you were to increase the pressure you are at to 2 atmospheres then the partial pressure of Oxygen would be twice that at the surface PO2 0.42 ata / bar.

If you were to increase the pressure you are at to 3 atmospheres then the partial pressure of Oxygen would be three times that at the surface PO2 0.63 ata / bar.

Enriched air has a greater percentage of Oxygen. For example: if you had Nitrox 36 (that is 36% Oxygen instead of the usual 21%)  then the partial pressure at the surface would be PO2 0.36 ata / bar.

Putting all of this into a table we get the following:

* I have included the two most common blends of EANx and the maximum that you are allowed as a PADI Enriched Air Diver.

How does this affect you? This puts limits on the depths that you can go. According to PADI there are two partial pressures that you should be aware of 1.4 ata / bar and 1.6 ata / bar, respectively known as the maximum and the contingency.
From these two partial pressures you can work out the depths that you are allowed to go to. Obviously the maximum depth is the one that you don’t want to over and you should stay away from the contingency depth unless you want to suffer from Oxygen toxicity.

This table contains the maximum and contingency depths for different blends of EANx, according to my SUUNTO Vyper.

* 40 metres is the maximum allowable depth by PADI as a recreational diver so any blend less than 27% isn’t going to affect your maximum depth.

Comparing this table to the one that PADI gives in their Enriched Diver Manual, I notice that my dive computer is slightly more conservative in the maximum and contingency depths that are allowed and that is no bad thing.

One response to “Partial Pressure, what’s that?”